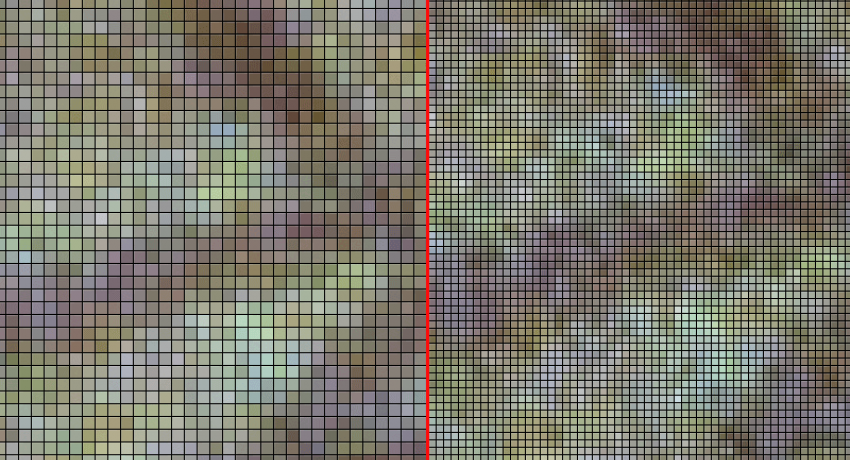 At what resolution should I scan my film?

It's a legitimate (and frequently asked) question, and you've probably heard that "35mm is 4k, 16mm is 2k, and Super 8 is 720p," or something similar. There's a lot of confusing, outdated, and just plain wrong information out there about this. So for this newsletter we want to address why high resolution scans make sense despite the outdated "common knowledge" that there are fixed resolutions for each gauge.

What does Resolution even mean?

Optical Resolution, however, is what a lot of people are thinking of when talking about resolution. It's a much more nebulous concept, because so many factors come into play. Optical resolution is typically measured by the number of discrete line pairs per millimeter that an optical system can reproduce. That is, a test pattern with lines that get progressively closer can be used to measure the limits at which the system becomes incapable of reproducing (or "resolving") those fine details. At a certain point, the lines blend together into a single blob. That's the limit of your optical resolution. Kodak and other film manufacturers provide this information in their data sheets, as measured in ideal circumstances.

In the end though, this only tells you about how much detail the film in question is able to resolve. There's no straight line between that number and the resolution you should scan at.

Not exactly. Film is an organic medium, consisting of light-sensitive particles suspended in an emulsion, distributed in an inherently random manner. Digital is an absolute, fixed grid. Because film grain is irregularly shaped, it takes many small pixels to accurately reproduce that grain, in the same way it takes more samples to accurately reproduce analog audio in the digital realm.

Film grain *is* the image, so the goal of high resolution scanning is accurate reproduction of the grain that the image is made of. 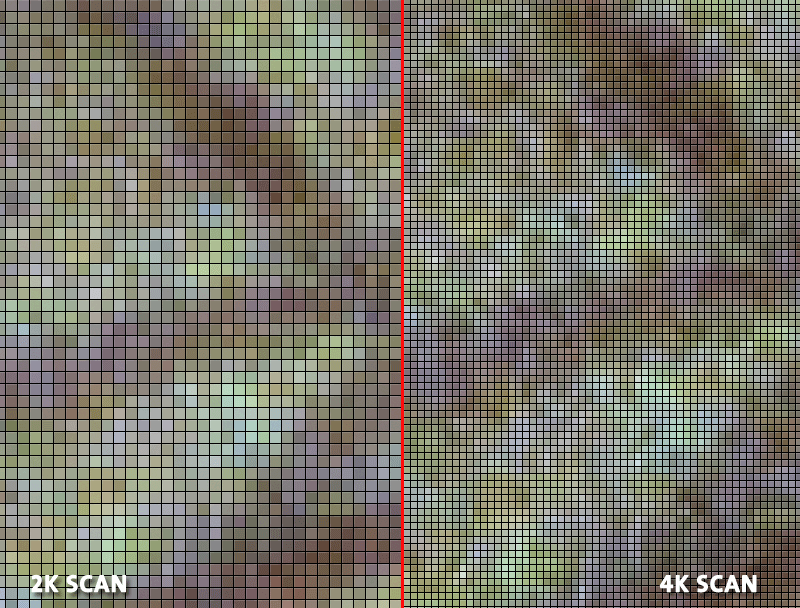 Scanning at higher (digital) resolutions for the purpose of squeezing out more (optical) resolution will eventually hit a point of diminishing returns. That point is determined by all the factors listed above.

We think this is the wrong question to ask in the first place. The real question is: What happens with the scan in once it's in the digital realm?

Imagine a 2k screen and a 4k screen, each with the same physical dimensions, side by side. You put a 2k scan on the 2k screen and a 4k scan on the 4k screen. If you're standing the proper distance from each screen, you're not going to see any difference between the two. However, if you put the 2k scan on the 4k screen, you now have to blow that image up 4 times (twice in each direction) to fill the screen. This might be done in post production, or it might be done by the television or a set-top box. But something has to do it, and that process requires that an algorithm create pixels where there weren't pixels before. That will always soften the image.

Your 2k scan won't look as good on a 4k screen as the same film scanned at 4k. A quick look at some common online retailers shows multiple 4k (UHD) televisions in the $350 range. In the coming years, 1080p HD will go the way of standard definition, simply through attrition, as UHD and larger screens replace them.

...And this is the larger point that many people miss -- the thing that we think is critically important when deciding on a scan resolution: Digital upscaling is always destructive to the image, but scaling downwards isn't. There's really no downside to scanning at 4k even if all you need today is 1080p HD. You'll always have that high resolution scan available for future use on new display technology.

Our goal is to make 4k scanning as affordable as possible. Many think it's out of reach because historically, it has been. But we've been on the forefront of changing that equation to bring the highest quality high-resolution scans to archives, filmmakers, students, and people looking to preserve their home movies. Combined with our recent addition of multi-flash HDR scanning, we're making this happen for more and more customers.