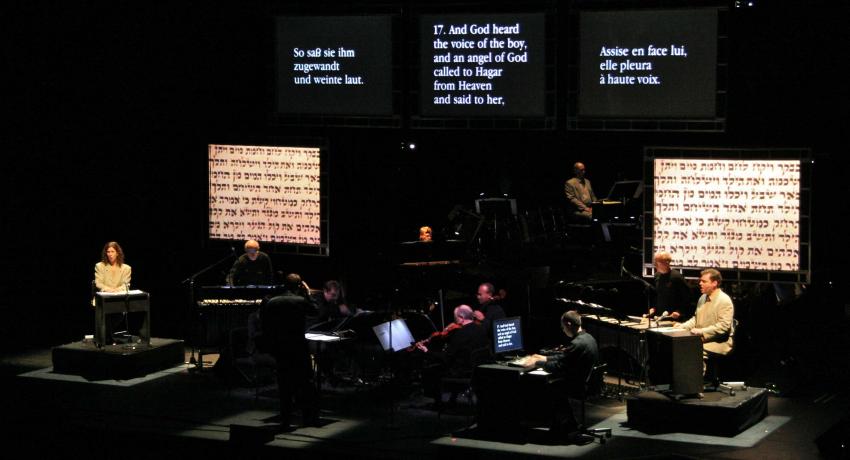 The Cave, Steve Reich and Beryl Korot's theater piece exploring the Biblical story of Abraham, Sarah, Hagar, Ishmael, and Isaac, was acclaimed by Time magazine as "a fascinating glimpse of what opera might be like in the 21st century." Epic in proportion, the original five-screen, eighteen-musician production consists of edited documentary video footage timed with live and sampled music. Commissioned by a consortium of presenters in Vienna, Amsterdam, Paris, Berlin, London, and New York, The Cave was premiered in Vienna on May 15, 1993, toured Europe, and opened the Brooklyn Academy of Music's Next Wave Festival in October 1993.

In 2003 Ben Rubin, from New York's Ear Studio, approached us to author a multi-screen DVD version of The Cave for their client. The project involves the simultaneous playback of 5 screens of video in multiple acts, in some cases accompanied by a live orchestra.

Early versions were shown with 5 Laserdisc players synced together. DVD was clearly the next logical format for this project. Ear Studio handled the integration and setup, Gamma Ray Digital encoded and tested all of the video on a mirror setup in our Boston studio.

Encoding for multi-screen DVD playback is not inherently difficult, but requires meticulous attention to detail. A single missing or extra frame on one of the discs will ripple throughout the project, and can take days to track down. On a project such as The Cave, sequences with lip sync are brief and are scattered among the five screens. This makes it especially tricky to test for any potential sync issues.

In 2005, we were asked again to help prepare a version of the project for playback off the hard disk based Dataton Watchout system. In this case, it was decided to use MPEG2 for its file size and picture quality, but to work at bitrates higher than those allowed by DVD. We again worked off of the original Betacam SP tapes, captured to our uncompressed edit system. Encoding was done with the Cinemacraft encoder for extremely high quality.

More information about The Cave: